A famous trek for the beginners

Highlights of Annapurna Base Camp Trek: 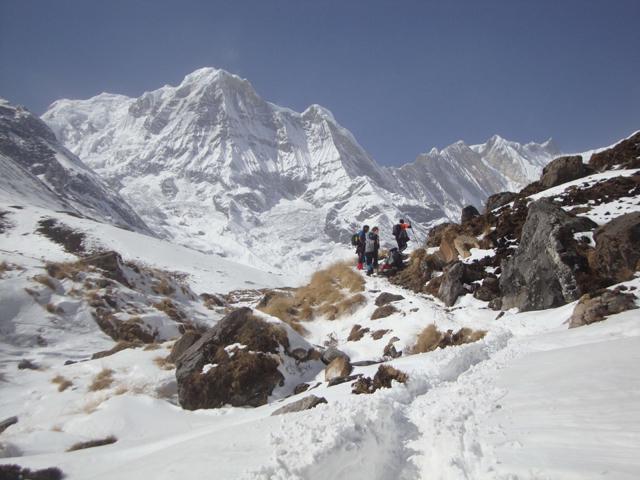 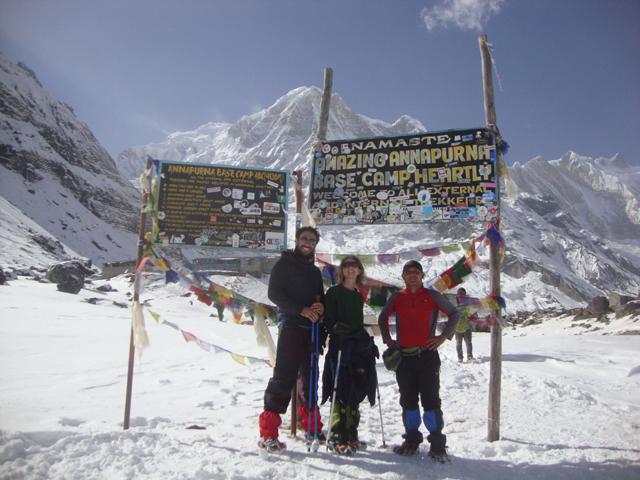 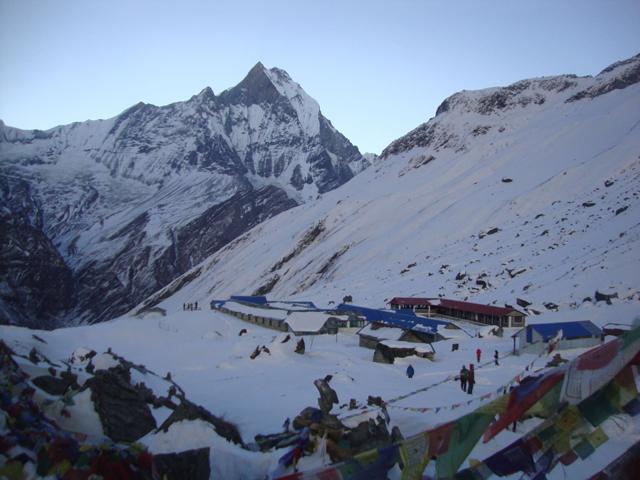 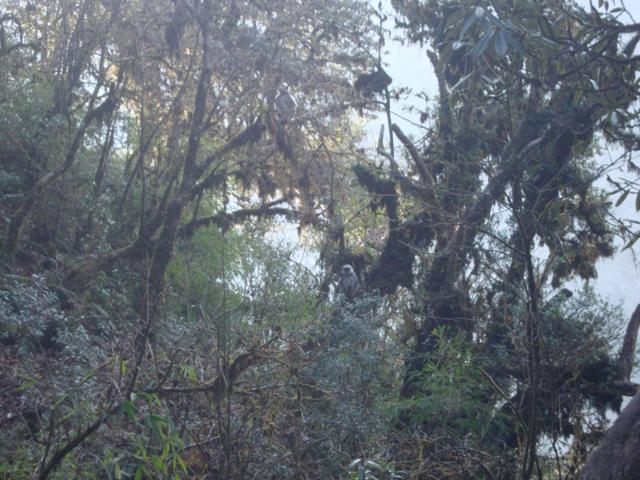 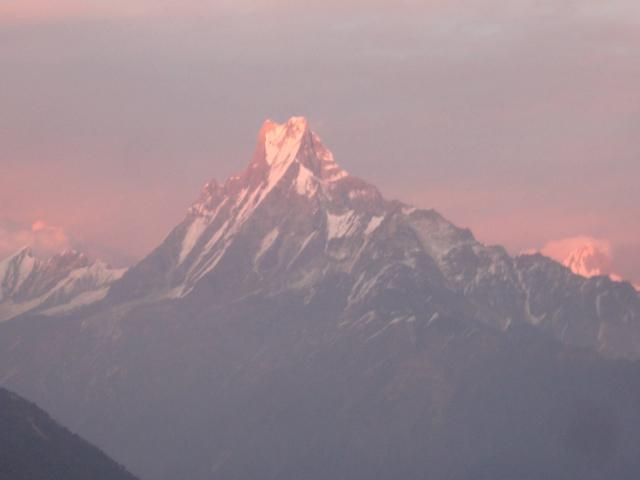 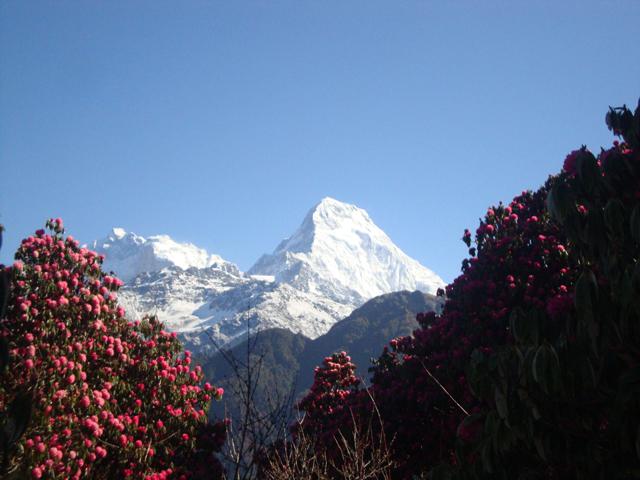 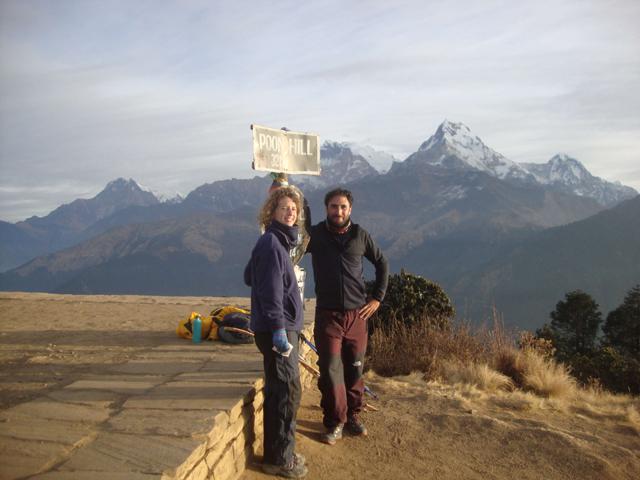 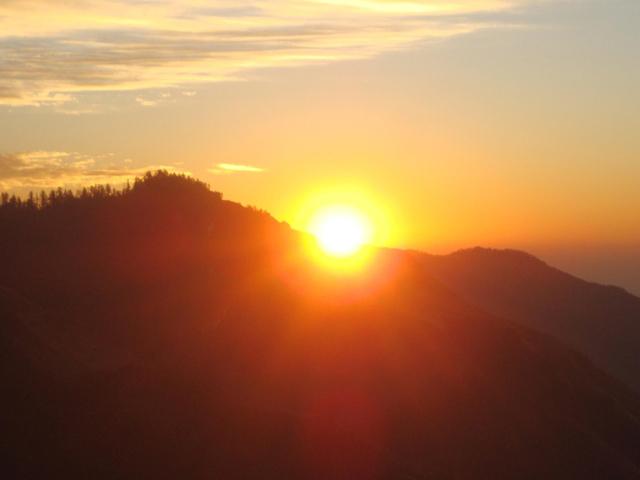 The Annapurna Sanctuary route is also known as Annapurna Base Camp Trek in Nepal. It is one of the most popular treks in the Annapurna region. The walk starts at Nayapool and trail goes throughout villages, paddy rice fields, Rhododendrons trees, and different landscapes with the views of Annapurna and Dhaulagiri ranges.

We do this trek combined three highlights such as Poon Hill, Annapurna Base Camp, and Jhinu Hot spring, etc. Poon Hill is a famous viewpoint with Sunrise views on the panoramic Annapurna and Dhaulagiri ranges. Annapurna Base Camp has a 360-degree splendid view of towering Annapurna range between 6000m to 8091m peaks and lies on the heart of the Annapurna range. We head to Jhinu Hot spring at the bank of the Modi River and enjoy the natural hot water bath after we come back from coldness ABC.

Rhododendron flowers bloom colorfully at an elevation between 1400m to 3300m en-route of Annapurna Base Camp Trek in spring (March to May). Machhapuchhare is also known as Fishtail (6993m) which is the most attractive, beautiful, and trekker’s favorite mountain in the Himalayas of Nepal.

The Langurs (white monkeys) often see around Tadapani and Modi Khola valley between Sinuwa and Doban. Donkeys, cows, goats, and water buffalos come across on the trail. Many types of birds sing early in the morning. The local’s daily life can see in the Uleri, Chhumrung, Sinuwa, Landruk, and Dhampus villages.

There are a few avalanches sections between Himalaya to Machhapuchhare Base Camp. We do have the latest information on trail condition. The fresh snow encounters at ABC from January to March.

Annapurna Base Camp Trek can complete within 7 to 13 days due to several different trails for starting and also ending points. We do end the trek at Dhampus Phedi. We do travel to Pokhara from Phedi by taxi or bus and Pokhara to Kathmandu by tourist bus.

Itinerary of the Annapurna Base Camp Trek.

Day 01: International Airport pick up.
Please check the High Camp Trekking cardboard upon arrival at Kathmandu Airport. Our company representative helps you transfer to Hotel in Thamel (touristic center). We explain to you about things to do in Thamel and Kathmandu.
Day 02: Trek briefing, preparation and visit Sawayambunath (Monkey temple).
We explain to you about each day program and packing list of trekking equipment while on the trek. Today, we buy Annapurna hiking passes and bus tickets. We take to you for a tour of world heritage site Sawayambhunath (Monkey temple) in the afternoon.
Day 03: Kathmandu to Pokhara by Tourist bus.
We go to the Tourist bus station from the Hotel. The tourist bus leaves to Pokhara from Kathmandu at 7:00 AM. We pass throughout the small villages, paddy fields, and Trishuli and Marshyangdhi River valley when there is driving from Kathmandu to Pokhara on the Prithiviaraj Marga Highway. We see Mt. Ganesh Himal, Manaslu and Annapurna range on clear weather from the Highway. We walk on Lakeside and boating on the Fewa Lake and visit Barahi Temple into the center of the Lake after arrival in Pokhara.
Day 04: Pokhara by Nayapool by Taxi/Bus and trek to Uleri village 1960m/4hrs.
After having breakfast in Pokhara, it’s about an hour Annapurna scenery drive to the Nayapool trek starting point. We walk to Birethati Annapurna hiking passes check post and continue following the trail to Tikhedunga village. An hour steady climb takes you to Uleri village at an altitude of 1960m. There is a lovely view of South Annapurna and Hiuchuli from Uleri.
Day 05: Uleri to Ghorepani 2860m/5hrs.
We ascend to Ghorepani through dense Rhododendron forest. We witness panoramic views of the Annapurna and Dhaulagiri range from Ghorepani.
Day 06: Ghorepani to Poon Hill 3210m/1hrs view point and descent to Tadapani 2630m/6hrs.
We will early wake up and get up to the famous Poon Hill viewpoint to see the Sunrise and 180-degree panoramic views of Dhaulagiri and Annapurna range including Fishtail. We come back to Ghorepani for breakfast and packing the bag. We hike to Tadapani through Rhododendrons and Pine forest. There is an excellent view of Fishtail from Tadapani.

Day 07: Tadapani to Sinuwa 2360m/7hrs.
As soon as we leave Tadapani, we descend with a steep downhill through the rhododendron forest. There often see the Langurs (white monkeys) on the trees. The beautiful Fishtail is closer and closer views when we are heading to Chhumrung village. From the top of the Chhumrung, again we see the South Annapurna, Hiuchuli Fishtail much closer and the entire village.

We descend on the stone steps towards Chhumrung Khola. From the hanging bridge, we take the ascending stone steps to reach Upper Sinuwa at the top get good views of Fishtail and Annapurna III.

Day 08: Sinuwa to Dheurali 3300m/7hrs.
The trail climbs up gradually through Rhododendrons and bamboo forest to Kudhigar at 2540m. Views of Machhapuchhare is amazing and towering from the trail. From here, the trail is a steep descent to Bamboo.

The gradual uphill to Doban begins immediately where the lodges of the Bamboo end. We see only the top of Machhapuchhare from Doban.

We follow the Modi Khola River, past the shrine to reach Himalaya through lush forest.

We walk the steadily uphill rocky trail from Himalaya to reach Hinku Cave an hour. Dheurali is above the tree line which is visible from Hinku Cave. We are crossing the past landslides and avalanches on the trail to reach Dheurali at an elevation 3300m.
Day 09: Dheurali to Machhapuchhare Base Camp 3700m/3hrs.
It takes about 10 minutes to reach the avalanche hit section from Dheurali. We see Mt. Machhapuchare, Gangapurna and Annapurna III in the distance from the valley. We keep walking ahead to a small steel bridge that has to cross to reach Machhapuchare Base Camp. It has an amazing view of South Annapurna from MBC.
Day 10: MBC to Annapurna Base Camp 4200m/2hrs.
We are heading to Annapurna Base Camp by starting early from MBC. It’s gradual uphill walking through alpine terrain with grassland on the Rocky Mountains for about 2 hours. We are surrounded by Mt. Annapurna I (8091m), Annapurna III, Gangapurna, South Annapurna, Hiuchuli, Gandharva Chuli, Singachuli Peak, and Machhapuchhare at Annapurna Base Camp. Sunrise and Sunset are truly fabulous in this Annapurna range. We walk to the ridge behind the lodges to see the glacier, Annapurna I (8091m), and its proper expedition base camp.
Day 11: ABC to Bamboo 2400m/7hrs.
We head down the same route we took to reach ABC all the way to Bamboo by crossing MBC, Dheurali, Himalaya, and Doban.
Day 12: Bamboo to Jhinu (Hotsping) 1575m/6hrs.
Today, we back to the top of the Chhumrung village with a lot of up and downhill steep. We descend on the steep steps to reach Jhinu Danda from the signpost of Chhumrung. Jhinu is famous for natural Hot spring at the bank of Modi Khola and views of paddy fields and subtropical forest surroundings.

Day 13: Jhinu to Pothana 2100m/7hrs.
We descend on the steep steps to reach New Bridge. We go on the left side of the Modi Khola by crossing the longest steel bridge. We pass through lush forest and terraced fields to reach Landruk village. Here, we see the local’s daily life. We ascend to Dheurali and Pothana with nice views of South Annapurna, Hunuchuli, and Machhapuchhare. It’s an amazing view of Sunset over Annapurna panorama which should not miss from Pothana. It's also lovely to hear many types of birds singing around Pothana early in the morning.
Day 14: Pothana to Dhampus Phedi 3hrs and to Pokhara by Taxi/Bus.
We trek to Dhampus village and then descend on the steep steps to Phedi. We travel to Lakeside/Pokhara by bus or taxi for half an hour. We have free time in Pokhara in the afternoon.
Day 15: Pokhara to Kathmandu by tourist bus.
While driving from Pokhara to Kathmandu, there see some towns, countryside, Marshyandi, and Tirsuli River valley. It takes about 6 to 7hrs drive on one of the busy Highway called Prithiviraj Marg.
Day 16: Free day in Kathmandu.
Kathmandu has several cultural World Heritage in Kathmandu. You can make tours to The Great Boudhanath Stupa (Buddhist site) and Pashupatinath Temple (the oldest Hindu Temple).
Day 17: International Airport departure.
Our company representative offers Khata (good luck scrap) and drops you at the International Airport in Kathmandu in time for the flight back to home.
Note:- Request a costum itinearay.
The itinerary can be changed for an interesting side trip or additional acclimatization days if needed while on the trek. Do you have any inquiry about Annapurna Base Camp Trek? Or, would you like to see how it can be customized to your needs? DM us.

The following cost and date are for per person for online booking. If the Annapurna Base Camp Trek departure dates do not match for you, please DM us and we will happily customize your trip on the date that you need.

Fixed departure dates for the Annapurna Base Camp Trek. Cost includes: Cost does not include:

We do insure for trekking staff and provide warm enough equipment. We do our best for your safety. Although we suggest you buy comprehensive travel insurance that can cover flight cancellation, medical treatment, and Helicopter rescue emergency evacuation. Please buy the policy that can cover for trekking activity up to 4500m for the days you will actually be trekking. 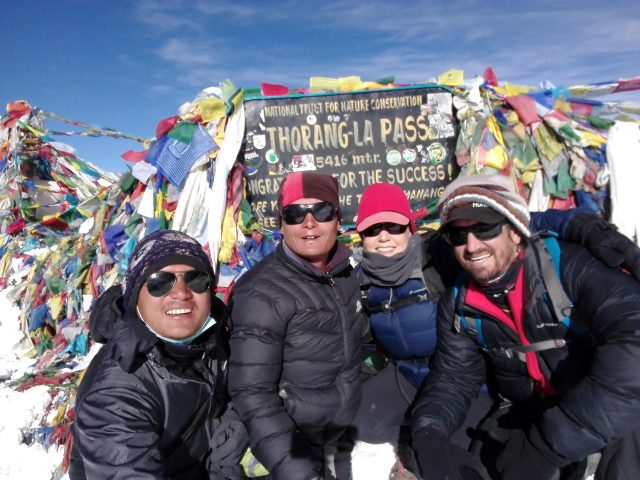 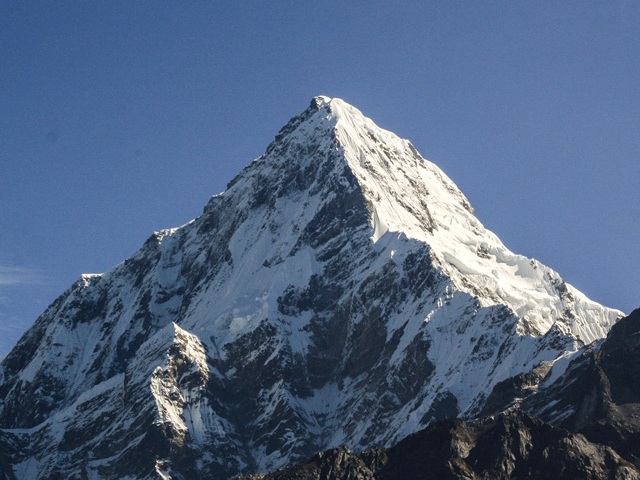 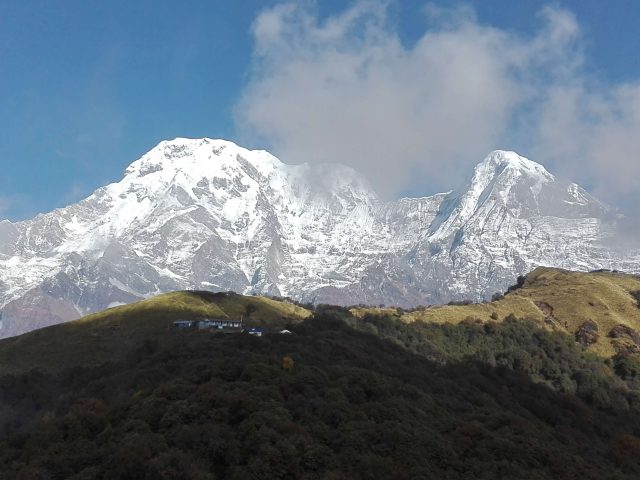